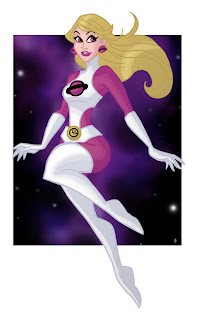 Saturn Girl from the Legion of Superheroes. I actually drew this piece the same day i did that Power Girl pic about 4 months ago, but just never got around to coloring it until now. Also, it amazes me as to how many people don't know who Saturn Girl is! (well, actually, it doesn't because i'm not that much of a Legion fan either and don't know too much about them outside of the show and their appearances in the DC animated universe) You have to admit that Saturn Girl looks cool though, right? Again, why do I draw so many DC characters?!?! Where is the love for Marvel?!?! lol
Posted by Big Chris at 1:56 PM