So i received an email today from someone stating that they had one of my sketch cards from last year's Marvel Masterpieces set! 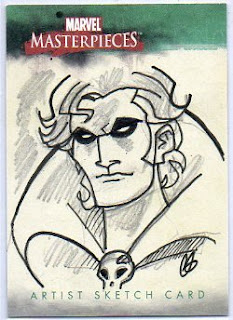 This particular card is of Adam Warlock. I will say one thing... it's really painful to look at my sketch cards now, because i absolutely had NO idea what the hell i was doing! It was my first time and i was really intimidated to be doing cards with such an awesome variety of artists who i have admired for years. Not only that, but didn't even know what tools to use, so it basically came down to just crappy pen and pencils. UGH! Thank God i have improved some since then and hopefully i'll get the chance to take a crack at some more actual sketch cards in the near future.

I know there are at least 20 more cards that i didn't post pictures of floating around somewhere out there. Maybe some more will turn up one of these days...

(Special thanks to Paul for emailing me this)
Posted by Big Chris at 11:05 AM