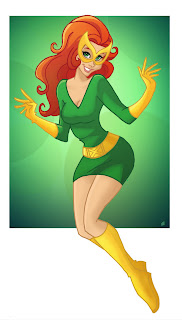 So, while the old hand is healing up, i thought i should start coloring the numerous amount of drawings that i have laying around and scanned into my computer. First up is the uncanny Marvel Girl herself, Jean Grey. This has to be one of my all time favorite costumes in comics. I mean if you think about it, Jean Grey has had a few of the coolest costumes in comics, especially this one and her Phoenix/Dark Phoenix costume. It's too bad that she has died more times in comics than there are Police Academy movies. Hopefully, Marvel will bring her back into mainstream comics again in the near future.

On a side note, did anyone pick up the X-men Legacy Annual that came out this past week? I have to say that Rogue's new costume is a definite A+ in my book! Maybe i just have a thing for scarves. I will say that when my hand heals up, that it will most defintely have to be put into a drawing!
Posted by Big Chris at 4:45 PM