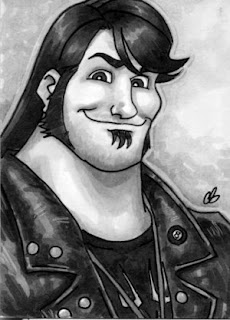 Eddie Riggs from Brutal Legend! How awesome is this game! I haven't had this much fun with a game in a looooooooong time. Great characters, great storytelling, an incredible soundtrack and a overall fun experience that is second to none! If you haven't tried it out yet, do what you have to do to play it (well....keep it within the law ;-)

It's so chilly down below...

http://twitter.com/bigchrisgallery
Posted by Big Chris at 8:35 PM No comments:

The King of all Wild Things 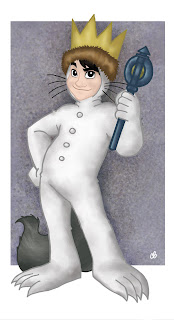 Just in time for the movie!

One of my favorite children's books of all time. 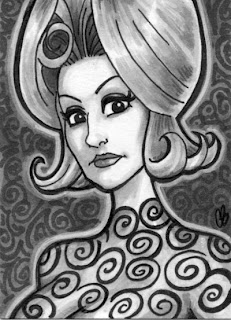 Well, the old drawing hand has it's good days and it's bad days. Luckily, today was a decent one and I was able to get a sketch card done to help get back into the swing of things. This one is of Lisa Marie as the Martian Woman from the cult movie (and hopefully, one day, a classic) Mars Attacks. I know there's a lot of people out there that really didn't "get" or like the movie, but, for me, it's one of my all time favorites. Truly hilarious and just all out mayhem! Not only that, but it had a GREAT cast!

The Martian Woman had to be one of the coolest costumes I had ever seen, at the time, and it still holds up pretty well today. Oh, how I would kill to see someone cosplay as this. That's a true challenge right there, especially if they try to get her "walk" down.
On a side note, last weekend was 24 Hour Comic Day. My hats off to those that participated because you all are greater men and women than me. I'll be honest, I just don't have the discipline for it. When I draw, it's pretty much in spurts. I'll go for about 4 hours and then just stop for the rest of the day. To do it for 24 hours straight (and to be awake, for that matter) is just astounding and damn near impossible for me lol. It also requires a sheer amount of talent that I just don't have, so to those that actually did it last weekend, you all deserve a pat on the back and a "job well done" chant. One of these days, i'd like to try one out, but I think that i'm going to have to work my way up to it and go on a strict training regimen (similar to the movie "Rocky").
Posted by Big Chris at 7:26 PM No comments: 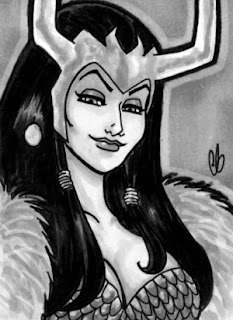 The new and improved Loki.

Man, do i love this character as a female. It just added an entirely new element of evil to him (or her, as the case may be now). The character design is flawless! It's going to be a sad day when Marvel gives her up and returns Loki to his previous form.