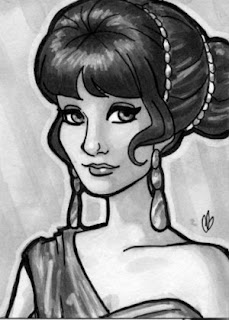 Yet another obscure character from my childhood
Not many of you out there will probably remember her. She was a sidekick to the Riddler in one episode of the 1960's Batman show with Adam West. She was played by Joan Collins and she had the ability to hypnotize men with her "siren's song". Funny thing is that i absolutely had NO idea that it was Joan Collins until now, when i found reference pics of the character. Fun fact that i didn't know until recently as well: She was the ONLY Batman villain on the show that actually had natural super powers.
Two points to those out there that actually remember her and the episode. ;-)
Yeah, i know that i've been doing sketch cards like crazy and not enough colored pieces as of late. I'm going to do my best to change that after Dragon*Con. I think that my artistic batteries need to be recharged a bit and that's just the place for that to happen. Another thing is that i'm trying to have a $#!@ load of sketch cards ready to sell at some conventions next year. My goal is to have about 100 done by next May. Not so hard, but coming up with 100 different characters to draw might be a bit tricky. I will say that with each card, it does seem to get a little bit easier. Maybe thats a sign that i'm getting better? Who knows!
Posted by Big Chris at 8:13 PM

Chris, I remember the character, too. In fact, Siren is my all-time favorite Batman character, comics or show. That's a terrific likeness of her. Well-done!
Good point about how she was the only villain or villainess on the show with superpowers.
Oh, and she also had a solo episode of her own, right after the 'teamup' with Riddler.