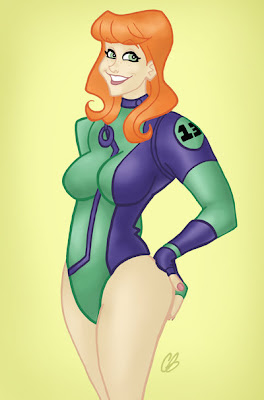 Caitlin Fairchild from Gen 13. I was trying to give her a bigger frame to push the point that she was extremely athletic and powerful, thanks to her powers. . Most artists that i've seen always draw her tiny and lanky. See, to me, if shes able to throw cars with ease, she has to have at least a little bit of mass behind her. I was borrowing the idea from a Frank Cho sketch of Quicksilver, in which he gave Pietro huge thighs, saying "Well, he's a runner, so naturally he should have powerful legs". Also, Adam Hughes' version of Fairchild was always thick and always struck my eye as how the character should be perceived. Either that, or i just wanted to draw her with a big toosh. You be the judge ;-)
Posted by Big Chris at 11:06 AM