An awesome artist, Ray Richardson (http://www.myspace.com/rayseeart), turned me on to a drink and draw event known as Dr. Sketchy's, right here in Orlando (well, technically Winter Park, Fl). It takes place at the Tatame Sake Lounge on the first Wednesday of every month. At each event, they have a live model who does a series of poses for the artists to draw from. This event was graced with the pressence of the beautiful Laila from Orlando Bellydance. At the end of the night, they have a contest to decide the best sketch of the night. As luck would have it, on my first night, i actually won. Here's my sketch: 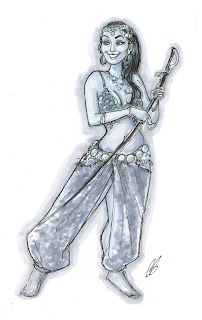 I'm really getting into this whole Drink and Draw thing. My first experience with it was at the FX International this year. It's just an awe-inspiring experience to be sitting next to (or at least in the vicinity) of some of my heroes such as Sean "Cheeks" Galloway (who probably has to be THE nicest guy i have ever met. That man has a halo over him or something), Dan Panosisan, Jim Mahfood, Jim Cheung and Dave Johnson. I will say that i was humbled in about .03 seconds after seeing some of the stuff they were coming up with at the event. Just amazing and they did it with such ease!

If there is an event like this in your area, i encourage artists everywhere to go to it. It's such an awesome experience and its a sure fire way to get you out of any drawing funk that you have bene in. It surely did for me (hence all of the sketch cards recently).
Posted by Big Chris at 12:21 PM