One of my sketches from the June Dr. Sketchy's event at Tatame Sake Lounge in Winter Park, FL is being used in the logo for Krondorkrew.com. Here's some info on these gnarly ninjas: 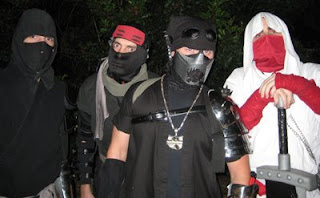 Since 2002,they have been perfecting their deadly art of lyrical ninjitsu, viciously slinging wicked ninja-based raps in every direction of South Florida, and winning over every audience they perform for. Shinobi and Masurao take their art form to high levels of visual and audio content. Each song is written with performance in mind, both emcees giving the immense amount of their energy to the stage show when performing. No audience has left a Krondor Krew performance unamazed.

Signed to EMPulse Records in June 2008, Krondor Krew have the tools, abilities, and ninja soldiers to take over any show, blast the system to full capacity, and leave the crowd cheering in excitement.

Check them out at: